Nick Wakeling is a designer, muralist and colourist.

Nick Wakeling is a designer, muralist and colourist who graduated from The Norwich School of Art and Design in 2010. Since then, he has found his strength in repeating pattern and colour, combining the two to produce bold and strong images inspired by Aztec, Aboriginal and Egyptian art. As time progressed, Nick left the sketchbook to start drawing patterns on other surfaces instead, including skateboards and other objects, but in particular, wall murals.

In 2014 Nick founded Impulse Prints, a project focusing on hand drawn patterns created by him. Since 2014 Nick has produced his patterns on a series of prints, which have been displayed on walls all over the country. As a freelance colourist, he has also graded many fun projects from music videos to short films, including The Silent Child which won Best Live Action Short film at the 2018 Oscars. 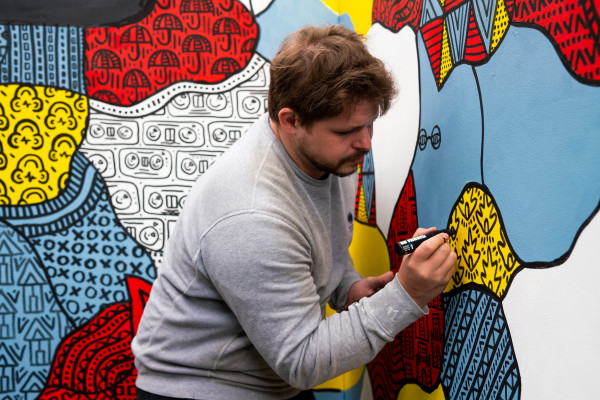 Birmingham is one of the UK’s most prominent cities, a place bursting at the seams with talent and culture. People from many backgrounds call the city home, and come together to form a beautiful mosaic that is impossible not to be inspired by. What’s more, inspiration also lies in Birmingham’s great buildings and structures, with its extensive criss-cross of canals and factories showcasing a rich industrial history. Birmingham is a city that is just waiting to be explored. Award winning artist Nick Wakeling did just this when he visited the city. 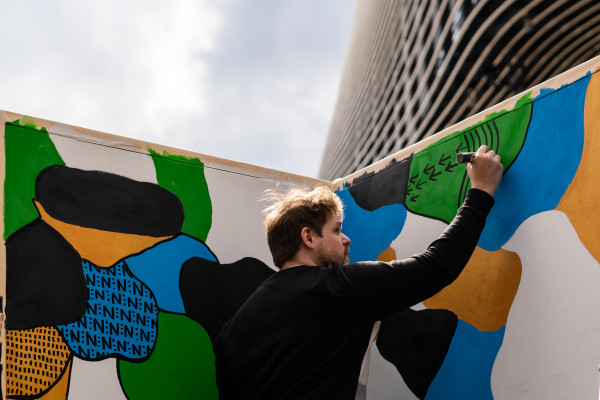 Nick visited Birmingham as part of the Unlock You City Roadshow. Unlock Your City is a movement that wants to celebrate cities and showcase the talent they have to offer. They’re on a mission to “inspire others through the art and voice of cutting-edge creators who find inspiration in their cities”. To do this, they are running a roadshow that will tour cities across the country, highlighting great sources of inspiration from each. Nick is in tow to create murals that reflect the unique nature of the cities through his eyes and from his spray can. 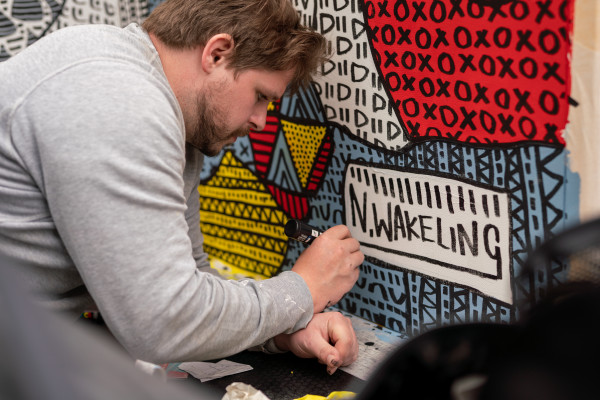 To help him unlock Birmingham, Nick explored it, immersing himself in the feel and flow of the city. He opened his mind to the sights and sounds of his surroundings so he could fully take them in. Here is what he had to say:

“Walking down the street as the sun dies down the colours of orange, beige and purple come around. Being spoiled with the amazing architecture Birmingham has to offer, I can’t help but be inspired for the piece I’m about to prosper. You tell me about the lyrical talent that has blessed this city, I merge the lyrics with shapes to make it look pretty. As the colours spiral around the city my creative process evolves, my pen hits that canvas and I go with the flow. From shopping centres to music, this city screams creative temptation. I can’t wait to express to you how I feel, and show you this inspiration.”

Nick’s Birmingham mural acts as a tapestry showcasing the city’s history, landmarks and culture. It is split into many segments with 22 of these featuring imagery that represent aspects of the city. For example, one section features glasses of red wine, an homage the song ‘Red Wine’ by the iconic Brummy band UB40. Nick also highlights Birmingham’s landmark buildings. One of his mural segments shows illustrations inspired by the inside of the Birmingham Symphony Hall, while another depicts the Roman style front of the town hall. All these segments come together to showcase Birmingham’s vibrant and eclectic character.

So, with that, Nick Wakeling has unlocked Birmingham… How will you? 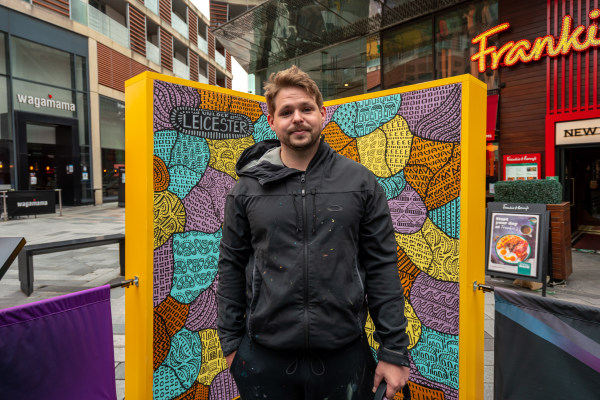